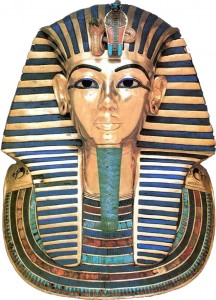 It’s been a year and a half since DNA Consultants introduced Rare Genes from History. We republish here the original press release from October 2012 as a means of familiarizing new and old customers with this unique autosomal marker test, exclusive to our company. Purchase now for only $149 ($134.10 with your customer discount).

For descriptions of all 26 Rare Genes from History, visit the product page.

If you have received your Rare Genes from History results, we encourage you to discuss them with others in the free forums at DNA Communities. How many did you get? Were they European, Native American, African or Asian? Do you think you got a given rare gene from your mother or father? From both?
PRESS RELEASE
Rare Genes from History:  DNA Consultants’ Next-Generation Ancestry Markers

PHOENIX — (Oct. 1, 2012) — DNA typing has gone from successes in the criminal justice system and paternity testing to new heights in mapping genetic diseases and tracing human history. John Butler in the conclusion to his textbook Fundamentals of Forensic DNA Typing raised an important question about these trends. How might genetic genealogy information intersect with forensic DNA testing in the future?

“At DNA Consultants, that new chapter in DNA testing arrived several years ago,” said Donald Yates, chief research officer and founder. “As we approach our tenth anniversary, examining human population diversity continues to be the whole thrust of our research, and it just gets more and more exciting.”

The company’s DNA database atDNA 4.0 captures and puts to use every single published academic study on forensic STR markers, the standard CoDIS markers used in DNA profiles for paternity and personal identification. In 2009, the company introduced the first broad-scale ethnicity markers and created the DNA Fingerprint Plus.

But its innovations didn’t stop there. In October 2012, the company announced the launch of its Rare Genes from History Panel.

“Theoretically,” noted Butler in 2009, “all of the alleles (variations) that exist today for a particular STR locus have resulted from only a few ‘founder’ individuals by slowly changing over tens of thousands of years.”

How true! Hospital studies have determined that the most stable loci (marker addresses on your chromosomes) have values that mutate at a rate of only 0.01%. That means the chance of the value at that location changing from parent to progeny is once every 10,000 generations.

So the autosomal clock of human history ticks at an even slower quantum rate than mitochondrial DNA. Like “mitochondrial Eve,” its patterns were set down in Africa over 100,000 years ago when anatomically modern humans first appeared on the stage of time.

Though the face value of the cards in the deck of human diversity never changed—and all alleles can be traced back to an African origin—as humans left Africa and eventually spread throughout the world, alleles were shuffled and reshuffled. Humanity went through bottlenecks and expansions that emphasized certain alleles over others. Genetic pooling, drift and selection of mates produced regional and country-specific contours much like a geographic map.

“These rare but robust signals of deep history can act as powerful ancestral probes into the tangled past of the human race as well as unique touchstones for the surprising stories of individuals.”

By the twentieth century, when scientists began to assemble the first genetic snapshots of people, it was found that nearly all populations were mixed, some more than others. The geneticist Luigi-Luca Cavalli-Sforza at Stanford University proved that there is almost always more diversity within a population than between populations.

So if there is no such thing as a “pure” population—a control or standard—how are we to make sense of any single individual’s ancestral lines? Statistical analysis provides the answer. And rare genes are easier to trace in the genetic record than common ones. Their distinctive signature stands out.

Back Story:  It All Began with the Melungeons

About the same time as DNA Consultants’ scientists were cracking the mystery of the Melungeons, a tri-racial isolate in the Appalachians, they became aware of certain very rare alleles carried by this unusual population in relatively large doses. The Starnes family, for instance, in Harriman, Tennessee, was observed to have a certain rare score repeated on one location in the profiles of members through three generations. The staff dubbed it “the Starnes gene.” 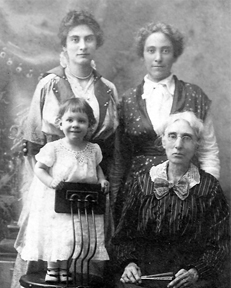 Soon, company research had characterized 26 rare autosomal ancestry markers—tiny, distinctive threads of inheritance that reflected an origin in Africa and expansion and travels through world history. Genes in this new generation of discoveries were named after some distinctive feature associated with the pattern they created in human genetic history–for instance, the Kilimanjaro Gene after its source in Central East Africa. The Thuya, Akhenaten and King Tut genes were named for the royal family of Egypt whose mummies were investigated by Zahi Hawass’ team in 2010.

The Starnes Gene” became the Helen Gene. Because of its apparent center in Troy in ancient Asia Minor and predilection for settling in island populations, it was named for “the face that launched a thousand ships,” in the famous phrase by Christopher Marlowe.

All 26 of DNA Consultants’ new markers are rare. Not everyone is going to have one. But that’s what makes them interesting, according to Dr. Yates.

Coming from all sections of human diversity—African, Indian, Asian and Native American—they are like tiny gold filaments in a huge, outspread multi-colored tapestry, explains Phyllis Starnes, assistant principal investigator and wife of the namesake of the first discovery. But does that mean that her husband has a connection to Helen of Troy? The markers don’t work on such a literal level, but it does imply that Billy Starnes shares a part of his ancestral heritage with an ancient Greek/Turkish population prominent on the page of history.

Over the past two decades, geneticists have worked out the macro-history and chronology of human migrations in amazing detail and agreement. The Rare Genes from History Panel is another reminder–in the words of an American Indian ceremonial greeting–that “We Are All Related.”

These rare but robust signals of deep history can act as powerful ancestral probes into the tangled past of the human race as well as unique touchstones for the surprising stories of individuals.

For more information about the science of autosomal DNA ancestry testing, visit DNA Consultants or check out its Twitter or Facebook page. 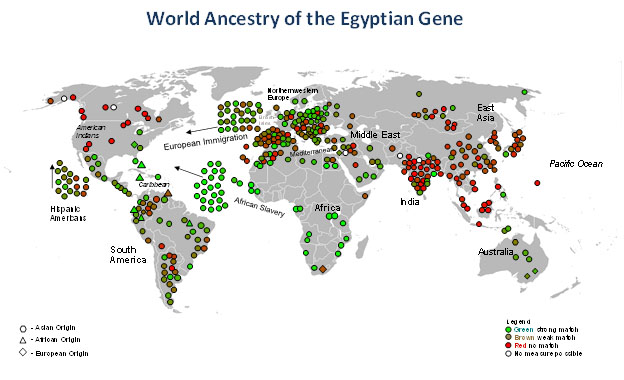 Distribution map of the Egyptian Gene shows its African origin, partial presence in Coptic populations today (green dots in Egypt) and scattered incidence around the world.

You may be interested to see that Phase II of the Cherokee DNA Study, which Epoch Times and others reported on in the news story Geneticist Traces Mysterious Origins of Native Americans, is being released, with an announcement and an interesting blog Nobody Can Tell Me Who I Am (more to follow).